The first regional water study commenced in 1972 and incorporated all the Regional District of Nanaimo's water supply needs ranging from Bowser to Cedar. Three sources of future surface water supply were identified as Cameron Lake, Englishman River and Jump Creek.

A comprehensive water supply study was completed in 1988. This was an integrated regional water study that focused on the Englishman River and Nanaimo River, South Fork - Jump Creek. At this time it was decided the Greater Nanaimo Water District (now the City of Nanaimo) would proceed on its own as it was determined to be more feasible for the Water District to develop its own water supply system.

In 1990, a referendum approved the borrowing of $450,000 for pre-design of a regional water supply system to serve the area from Lantzville to Qualicum Beach with a focus on Englishman River and Bonell Creek. Pre-design was conducted between 1991 and 1993 which concluded that it was more feasible to have two separate water systems (Qualicum Beach, Parksville and Nanoose (RDN) to be served by the Englishman River and Lantzville to be served by Bonell Creek).

A referendum held in 1995 to approve the design and construction of a bulk water supply system under the auspices of the Regional District of Nanaimo was defeated. Cameron Lake was ruled out by the province and the three jurisdictions were encouraged to focus on the Englishman River as a joint water supply source that would benefit fish.

A second referendum held by the City of Parksville limited its referendum to borrowing for the dam only, whereas the Regional District of Nanaimo referendum provided authority for borrowing its projected share of the entire bulk water supply system over a 25 year period to supply bulk water to its systems in French Creek and Nanoose. Qualicum Beach paid for its share of the dam from reserves and thus did not hold a referendum. The bulk water volume required for Breakwater bulk water customers (now EPCOR - French Creek) was included in the RDN's allocation as it is part of the overall RDN bulk water service area.

The Arrowsmith Water Service was formed in 1996 as a joint venture between the Regional District of Nanaimo, the City of Parksville and the Town of Qualicum Beach. The original capital plan, presented as part of the 1995 pre-design of the bulk water supply system, was approved for the design and construction of the Arrowsmith Dam by all partners of the AWS joint venture. The original plan concentrated on an intake at the confluence of the Englishman and South Englishman River with the treatment facility and other associated works located on Block 602.

A conditional water licence was issued in 1997 authorizing the construction of the Arrowsmith Dam, a maximum withdrawal of 47,888 cubic metres per day of water from the Englishman River for the proposed bulk water system and the storage of 9 million cubic metres of water at Arrowsmith Lake. The Conditional Water Licence and corresponding Provisional Operating Rule were issued based on the premise of utilizing the existing City of Parksville water intake in the interim until the future proposed water intake and treatment facility were completed.

The design and construction of the Arrowsmith Dam began in early 1997 and the dam was formally commissioned in September 2000.

Between 2000 and 2005, further progress of the AWS capital plan focussed on the future intake location. The capital plan adopted a triple bottom line approach of weighing environmental, economic and social factors and determined that the best intake location would be downstream of the originally proposed intake site. It was determined this option presented cost savings over the option of an upstream intake and also provided substantial long-term fisheries benefits for the Englishman River due to extending the low flow enhancement further downstream from summer releases at the Arrowsmith Dam. This benefit will become more significant over time as climate change could adversely affect the low flow regime of the river. This option received conditional support from the AWS management committee in 2005 and the report was finalized in 2008.

In 2009, the Arrowsmith Water Service retained Associated Engineering through a quality-based selection process to further develop the capital plan based on the downstream option. The primary objectives of the study were two-fold:

In 2011, Associated Engineering concluded the most suitable location for the intake (upstream of Highway 19 in Top Bridge Park) and the location of the water treatment plant (1030 Tuan Road - property adjacent to Parksville's public works yard). The conceptual plan prepared by Associated Engineering recommended a 20 year horizon phased project which would provide 24 million litres a day of treated water to the community at a cost of $37.5 million. An additional $15 million would be required to upgrade the treatment plant and transmission mains in year 2035. The report also concluded further ASR feasibility testing should be carried out as it could provide a very attractive technology tool for overall water resource management. In 2011, the ERWS purchased the property at 1030 Tuan Road for the water treatment plant.

After further water treatment plant pilot testing and a full year of water quality analysis, a further report prepared by Associated Engineering was submitted in 2014 recommending membrane filtration as the best suited technology for the Englishman River water source.

In 2013, the ERWS board engaged CH2M Hill to further progress the water treatment plant, intake and transmission mains to preliminary design. An option (Plan A) was prepared based on providing 24 million litres a day of firm membrane filtration capacity, disinfection with ultraviolet (UV) including all necessary transmission mains to connect to above ground reservoirs for distribution into Parksville and Nanoose water systems. This option was a phased approach based on providing the community with water for twenty years before required upsizing due to growth and development. The cost estimate based on this option (Plan A) was determined to be:

Given financial restraints and the uncertainty of federal/provincial grant assistance, the ERWS directed CH2M Hill to look at a reduced scale phased water supply system options which the City of Parksville could afford (about $20 million) without grant assistance. Four different water supply and treatment scenarios were reviewed, two of which were not in conformance with Island Health. The ERWS elected to proceed with the original option (Plan A) for federal/provincial grant assistance however, after a year of receiving no indication of grant assistance, the ERWS board choose the reduced phased option (Plan B) of 8 million litres of firm membrane filtration.

Plan A and Plan B

Plan A will provide the community with 24 million litres per day of membrane filtration, UV and chlorine disinfection, a new intake and transmission mains to connect to each jurisdiction capable of supplying the community for over twenty years without further upgrades or phasing. This option is at a cost of $37 million with the assumption of receiving $15 to $24 million in federal/provincial grants.

Plan B option is a multi-phased approach with reduced water treatment of 8 million litres per day of membrane filtration, UV and chorine disinfection, a new intake and transmission mains to connect to each jurisdiction. This option is capable of supply the communities needs for the next eight to ten years until further water treatment capacity is added. The initial cost for Phase 1 option is $24.3 million and $16.4 million in year 2024 for additional phased water filtration expansion to meet water demand needs.

On June 29, 2015, the ERWS project received funding support from the Government of Canada of $3 million and $3 million from the Province of British Columbia through the New Building Canada Fund: Small Communities Fund. Given this award of $6 million in senior government funding, the uncertainty of climate change and the need to be in conformance with Island Health requirements, there is a need to review Plan B to provide a minimum of 16 million litres a day of firm filtration capacity for the first phase of the project. The City of Parksville and the Regional District of Nanaimo (RDN) Nanoose Peninsula Water Service Area are now in a position to proceed with this high priority project and ensure a safe and secure water system for the community.

The Arrowsmith Water Service was formed in July 1996 as a joint venture between the Regional District of Nanaimo, the City of Parksville and the Town of Qualicum Beach. The Arrowsmith Dam was formally commissioned in September 2000. 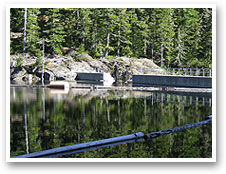 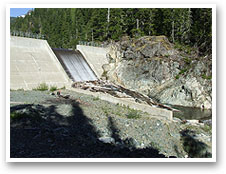